Skip to content
FacebookTwitter
SITN@shuttersinthenight.comFind
You Are Here:→Articles→How to Shoot In Night Fog

Fog can be an incredible visual. Hollywood knows – it’s used extensively to add to the drama of a noir scene or an action thriller, for example. And artificial fog is prevalent in live performing arts for the same reason. You won’t have the fog at your disposal every day and everywhere, but when you do, it can turn a normally bland scene into much more. In this post we’ll go over how to use fog compositionally, how to forecast fog, and how to adapt your settings for best results.

Photographers love to harness fog’s ability to diffuse light. Fog adds content to the sky where there was only emptiness before, letting moonlight glow across a scene or taking a streetlight that was once a single bright dot of light and throwing it across the frame. This also highlights the colors of artificial lighting and makes them a key part of the photo, as shown below. When shooting fog with artificial lighting, look for colored glows like from neon signs or billboards, and be sure you’re accounting for them in your composition, in addition to just the tangible objects in the scene. 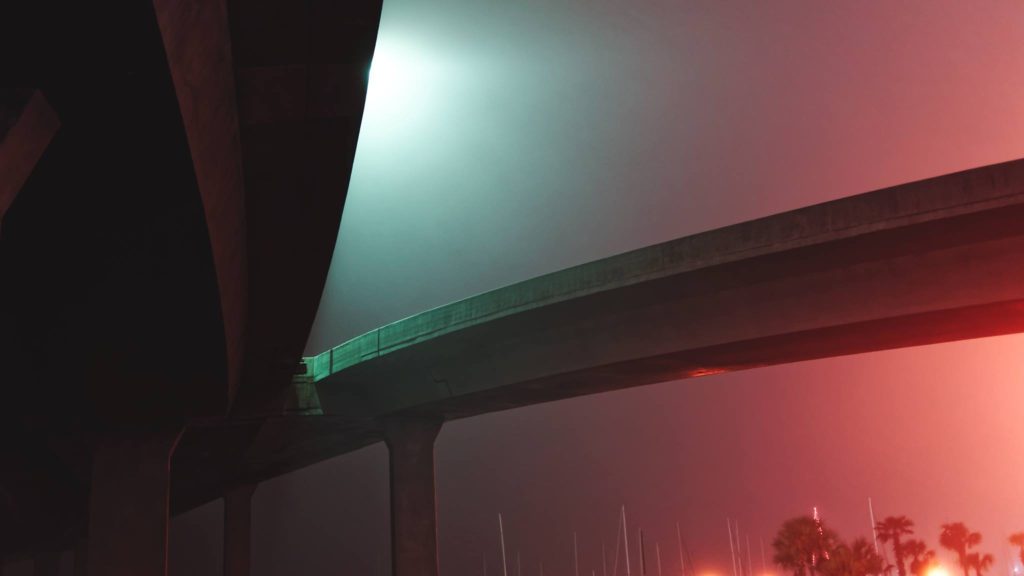 Fog, of course, also obscures objects, making distant objects appear that they’re fading away. That makes fog good for adding dimensionality to a photo, because the relative distance of objects is more apparent. Fog or hazy air is also important for creating silhouettes – on a foggy night, try taking a photo of someone with a bright streetlight behind them.

Unlike temperature and precipitation, fog doesn’t get much attention in weather forecasts. It can be hit or miss whether meteorologists will even mention it before it gets dense enough to affect travel. However, there are things you can look for in a forecast that indicate a higher chance of fog. Photographer Sebastian Tontsch notes that humidity and dew point are key for fog. Specifically, you want to look for humid, moist air and a dew point that’s near the ambient temperature. Sebastian uses wind and cloud forecasts to predict how fog will form, although that takes experience to do. Another condition that tends to produce fog, which Patrick Joust has caught on to, is large swings in temperature, especially if paired with moist air. However, actually being able to see is better than looking at weather data and trying to guess, so Patrick shared the great tip of using traffic cameras to check the actual fog conditions around the area. However, at the end of the day, being ready to react to fog by having your camera ready is just as important as learning to predict it.

Nighttime fog makes photography both easier and harder than in clear conditions. The way fog “carries” light typically makes scenes brighter overall and thus easier to expose. You can use less extreme aperture/shutter speed/ISO combinations, especially when shooting handheld, giving you some breathing room in that department – for example, you can lower your ISO to reduce noise. What’s harder, though, is focus. The way fog obscures objects and features can make focusing difficult, tripping up autofocus sensors and making it harder to judge manual focus. In foggy conditions, remember to try focusing on sharp edges and clearly defined features (especially text), and consider using a smaller aperture for a wider depth-of-field.

Fog is the closest we get to living in a cloud, and can change the look of our environment in dramatic and unexpected ways. Next time your town is blanketed in fog, look around and see what you can find in it.